Posted on 7th May 2020 in Blog by Andrew Mitchell 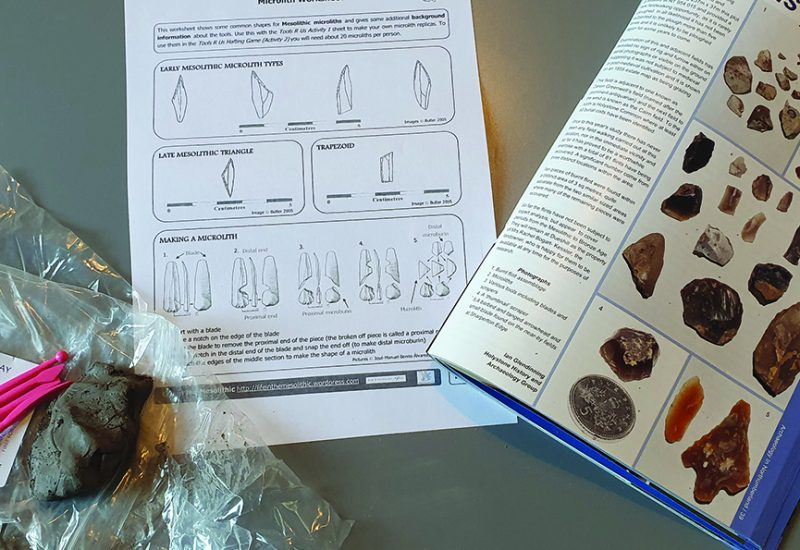 I’ve been doing a lot of reading about Community and Local Archaeology Groups in the last week and came across an article in one of Northumberland County Council’s ‘Archaeology in Northumberland’ magazines about flint discoveries at a farm in Coquetdale. There was a fantastic collection of photographs showing flints discovered by the Holystone History and Archaeology Group, and it reminded me of an activity pack I had seen on YAC’s website, all about Life in the Mesolithic.

Inspired by the wonderful photo of microliths in this article, I decided it would be a great idea to recreate my own flints from the national park and hope I can help you to do the same at home. 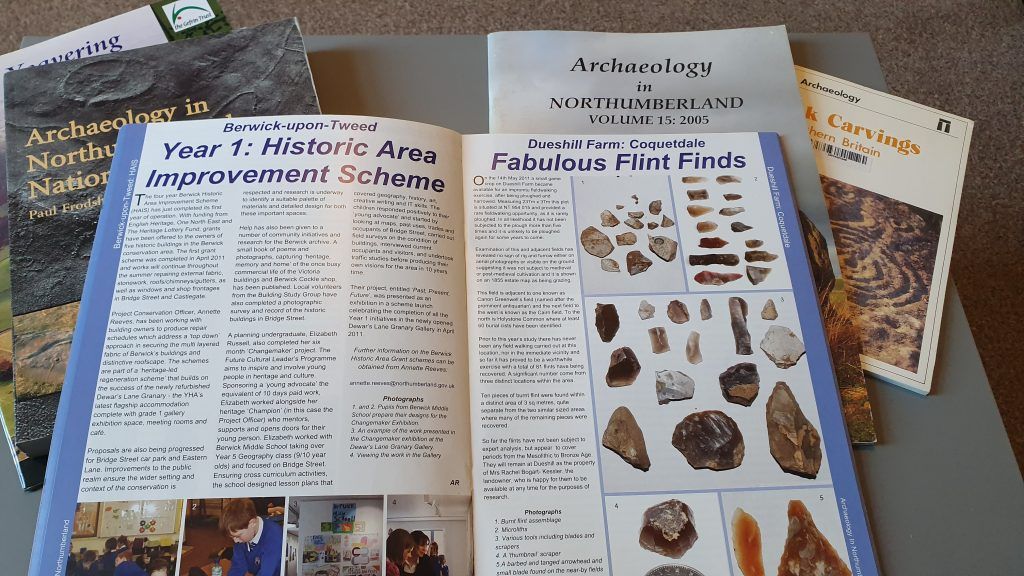 Before we do that, however, lets answer two very important questions:

What do I mean by the Mesolithic Age? And what exactly is a Microlith?

You may be more familiar with the term Stone Age. Archaeologists and historians however, split this into three different periods of time, whilst recognising slight variants depending on location:

That means some of the flints found in Coquetdale could have been there for almost 12,000 years! That’s 12 millennia, and I think that is amazing!

A fun fact about the Mesolithic age, is that this is when humans first domesticated wolves. So, when you play with your pet dog or take the pooch for a walk on your daily exercise, you can thank the Mesolithic people!

A microlith is a stone age tool, normally made from a flint. Flints make good tools and blades, because of their ability to produce thin and sharp edges. If somebody asked you to think about stone age tools, most people would likely think of our ancestors using a hard stone to split a flint, and then using this as a blade or a scraper.

When archaeologist’s use the term ‘lithic’ or ‘-lith’, they are referring to the use of stone. This is why you can find the terms in most words relating to the stone age, or even quite often in geological terms. So, a microlith, is quite literally a small stone! Most measuring about 1cm.

These were developed in the Mesolithic age because of the changing natural environment – it was getting warmer after the end of an ice age, and the animals hunted were smaller (think deer and not mammoths!). Normally a few microliths were ‘hafted’ (attached) to a bone and wooden hafts to make larger tools. Mesolithic man was also a pioneer in make do and mend – using smaller flint components meant if one microlith was damaged or became separated from the haft, there was no need to dispose of the entire tool, he could just replace the microlith.

To make your own Microliths, you will need: 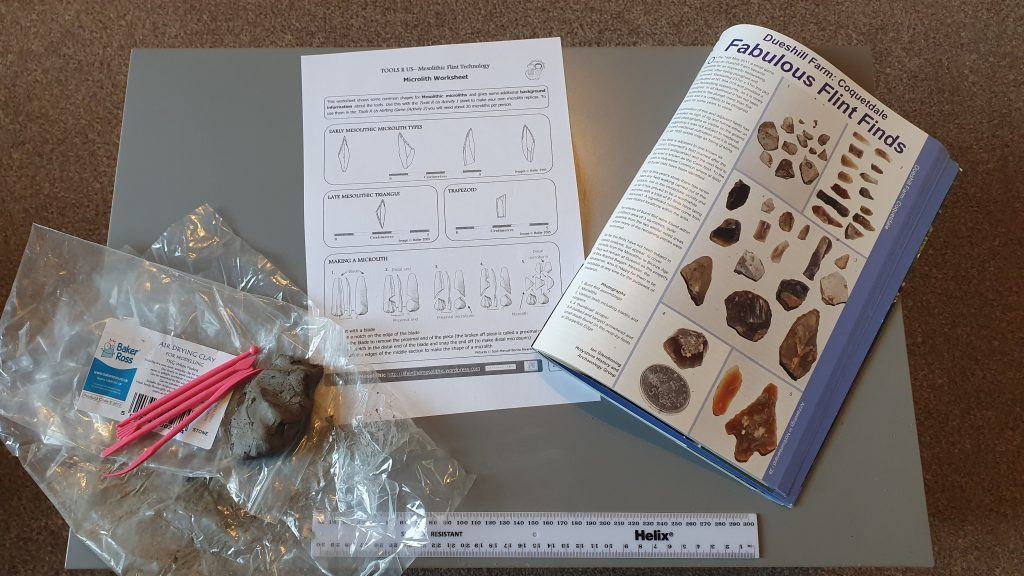 I used the Life in the Mesolithic activity pack from the Young Archaeologists Club which you can download here. It is full of activity ideas to explore the middle stone age, I used parts of the ‘Tools R Us’ activity to help me make my microliths.

First, I rolled my clay into a ball to warm it up, you don’t need to use much – remember the microliths only need to be 1cm in size.

I split my clay into 1 cm sized pieces which I could use to shape into individual microliths. 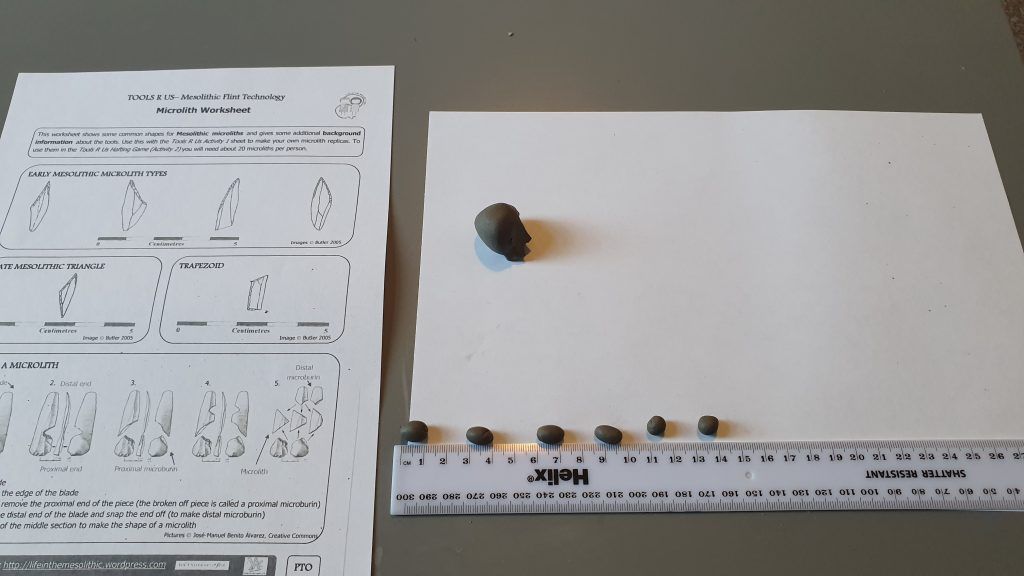 Using the worksheet for inspiration, I shaped each ball of clay into a microlith using modelling tools. Clay is really easy to shape and cut, so if you don’t have modelling tools there’s no reason why you can’t just use your hands, or anything with a thin straight edge. 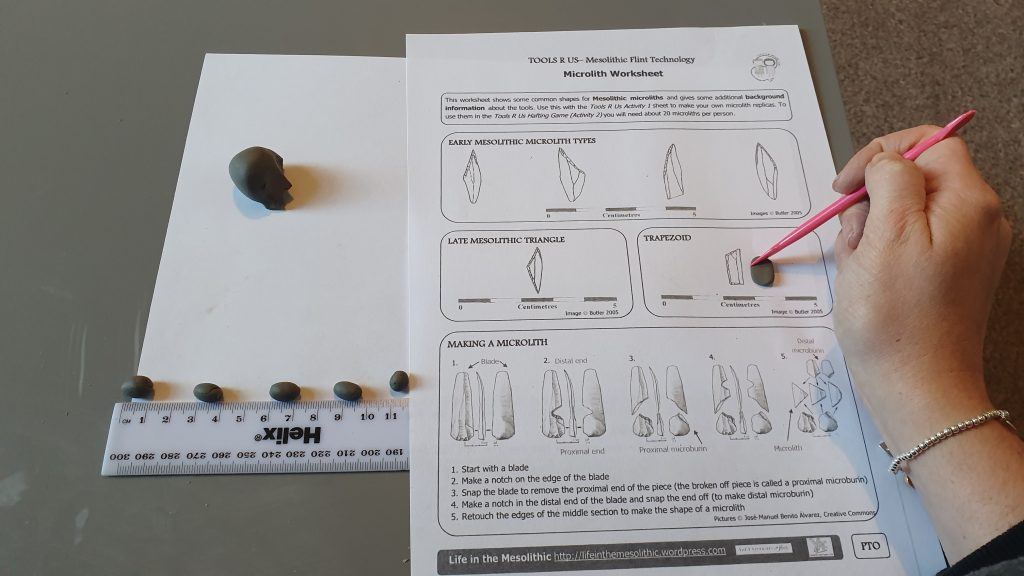 I repeated this until I had a collection of the same shape microlith which I set aside to dry. When I had 5, I started to create a different shape. Remember, a tool would comprise of quite a few microliths so make as many as you can! Try and make your microliths thinner at the sides, remember flint was used because of the sharp edges that can be created. 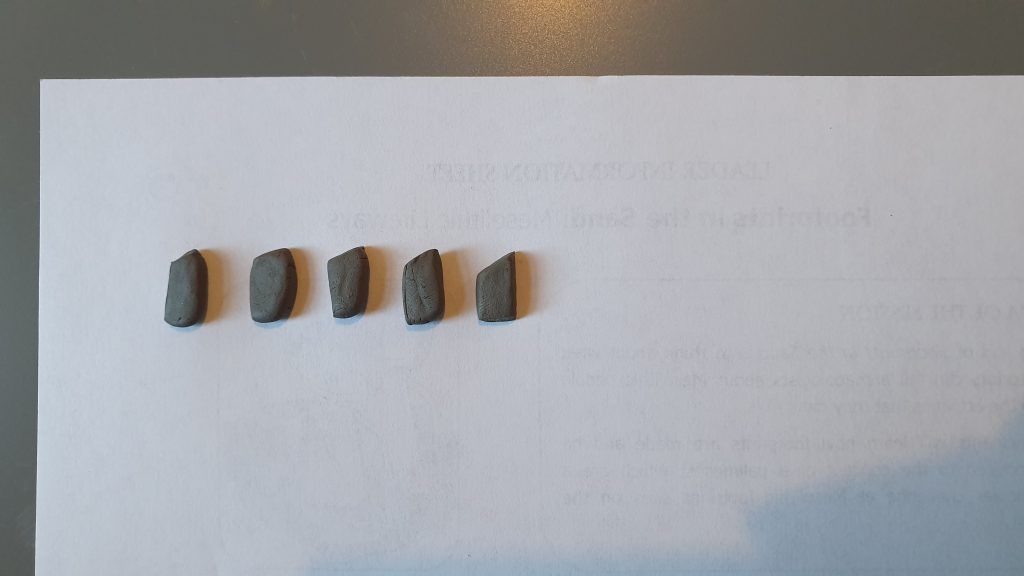 When I had made a variety of different shapes of microlith and felt that I would have enough to make a couple of tools, I laid them all out on a clean sheet of paper to leave them to dry overnight. 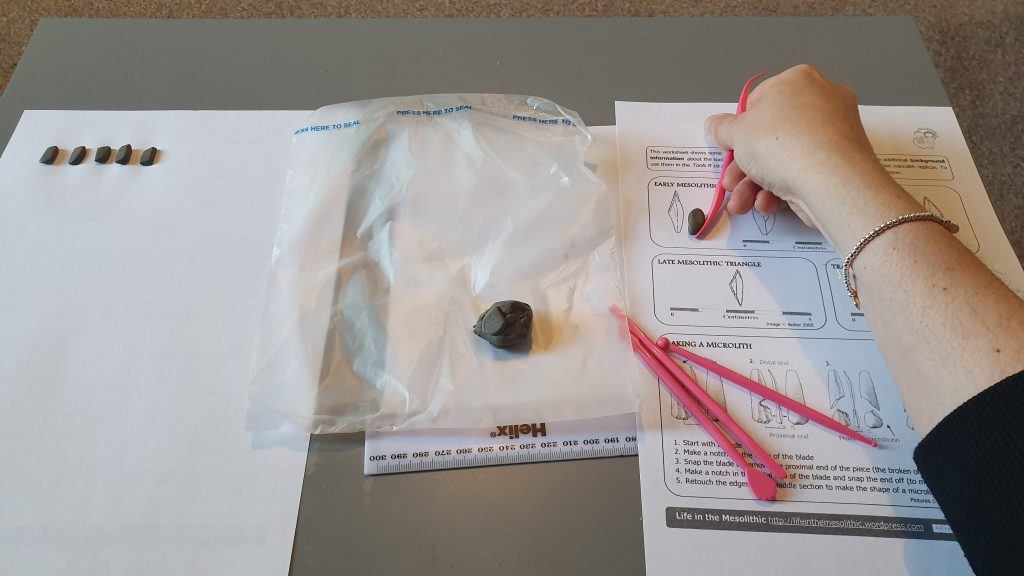 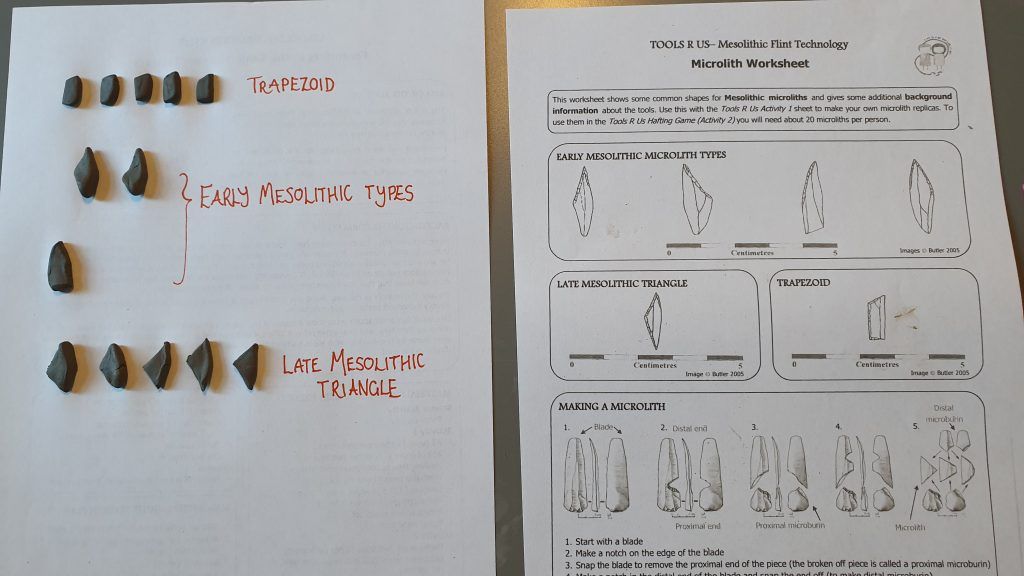 The next morning, all of my microliths had dried, so I set about looking for some strong enough twigs in my garden which I could ‘haft’ my microlith’s to. If you don’t have a garden, you could collect some twigs on a daily walk, or save lolly sticks and re-use them. 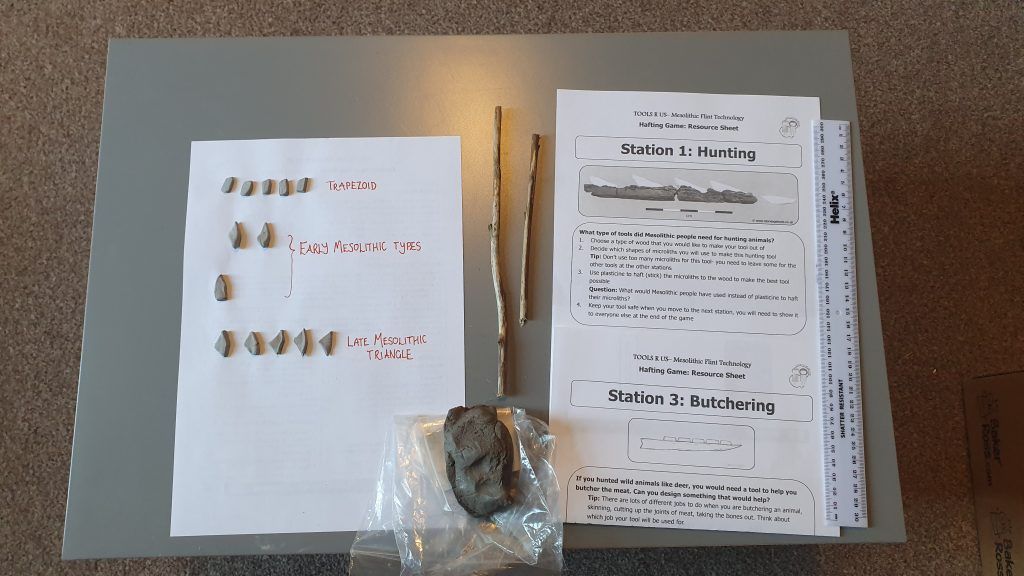 Microliths were likely attached to their hafts using birch glue, plant fibres or animal material. For this exercise I used some of my left-over clay. YAC suggest using plasticine. I used ideas from the next worksheet to help me decide how to haft my microliths onto the wood. I decided to make tools suitable for Hunting and butchering. 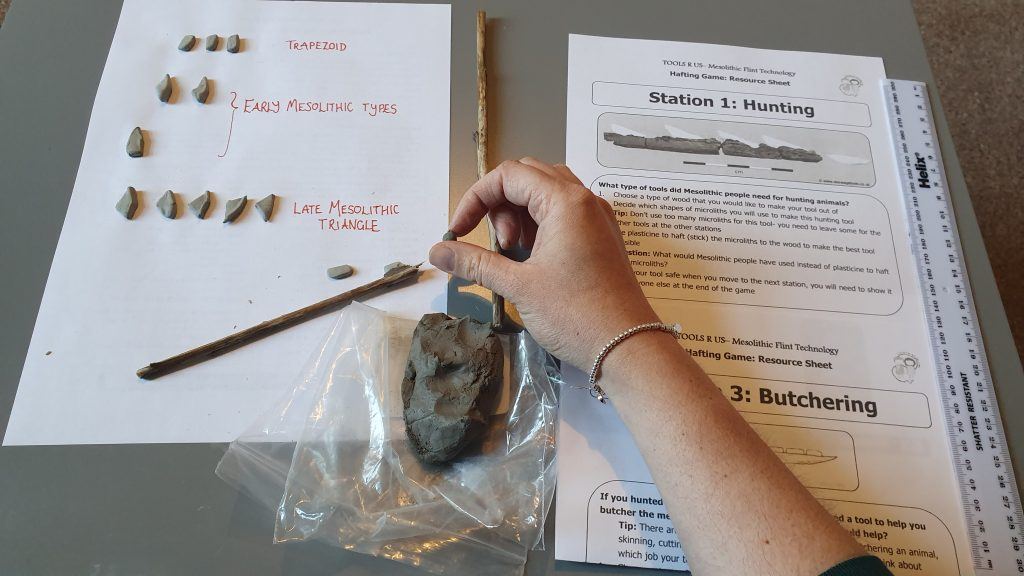 Making these tools really helped me think about what type of activity each tool would be used for and what shape microliths would be best for which job. For example – what would make a good barb or arrow when hunting animals or hat would be good for the cutting of meat ? 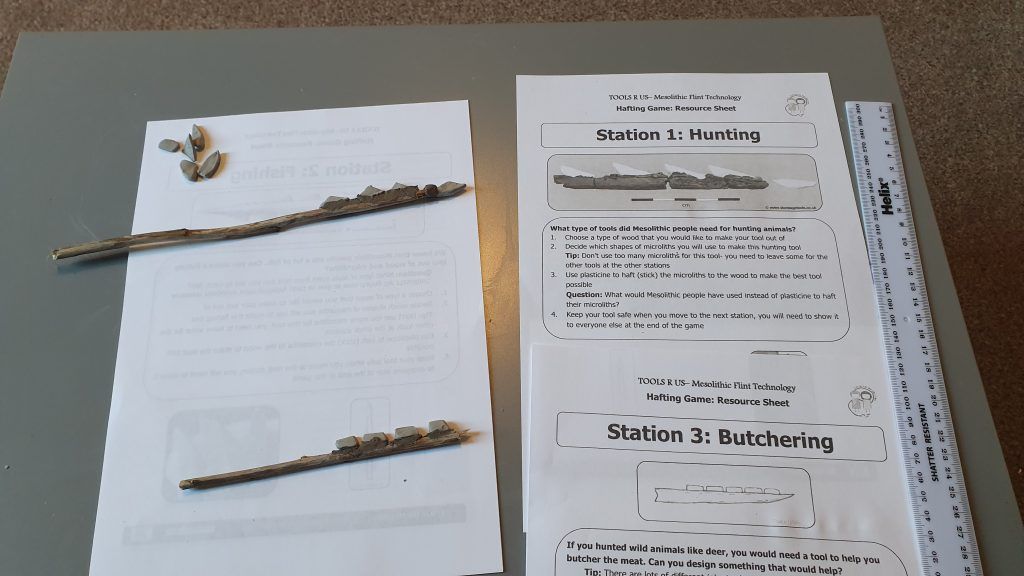 Here are my completed Mesolithic Tools, when you make yours why don’t you compare them to their modern counterparts? Think how manufacturing or technology has changed over time, and also what has changed very little? I hope you have enjoyed learning about Microliths and would love you to send us pictures of your own creations! Meanwhile I will be thinking of more ways we can keep our Young Archaeologist’s busy (and maybe older ones too!). 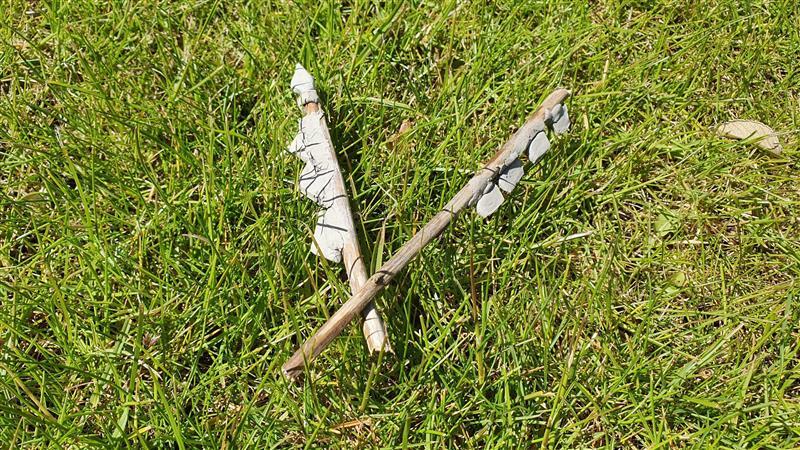