Posted on 14th May 2020 in Blog by Andrew Mitchell

Rosie Thompson shows you how to make your own Anglo Saxon Inspired Oat and Honey Cakes. 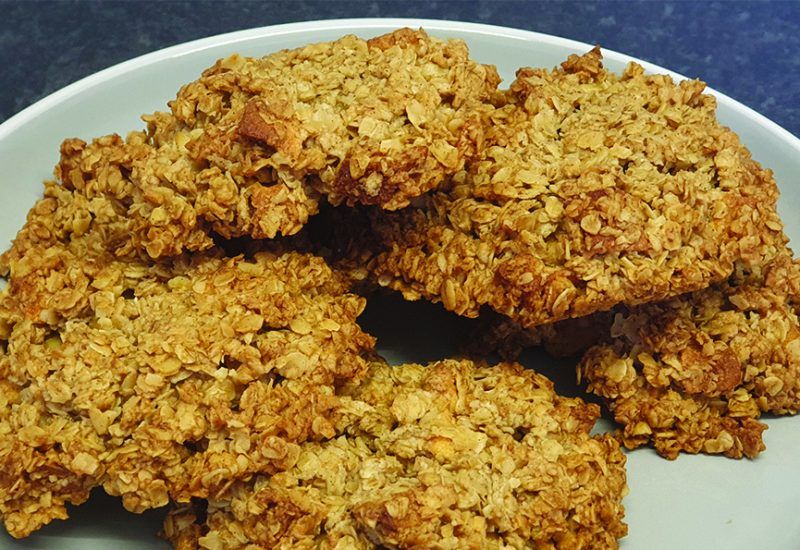 Did you know that there was once an Anglo Saxon palace within the borders of Northumberland National Park? Ad Gefrin, near Kirknewton, was one of the Royal sites of King Edwin, who in 616AD was King of both Deira and Bernicia, the two kingdoms which were united as Northumbria. The site continued in use for over 150 years, through various phases of expansion and change – rebuilt from fire destruction on two separate occasions. 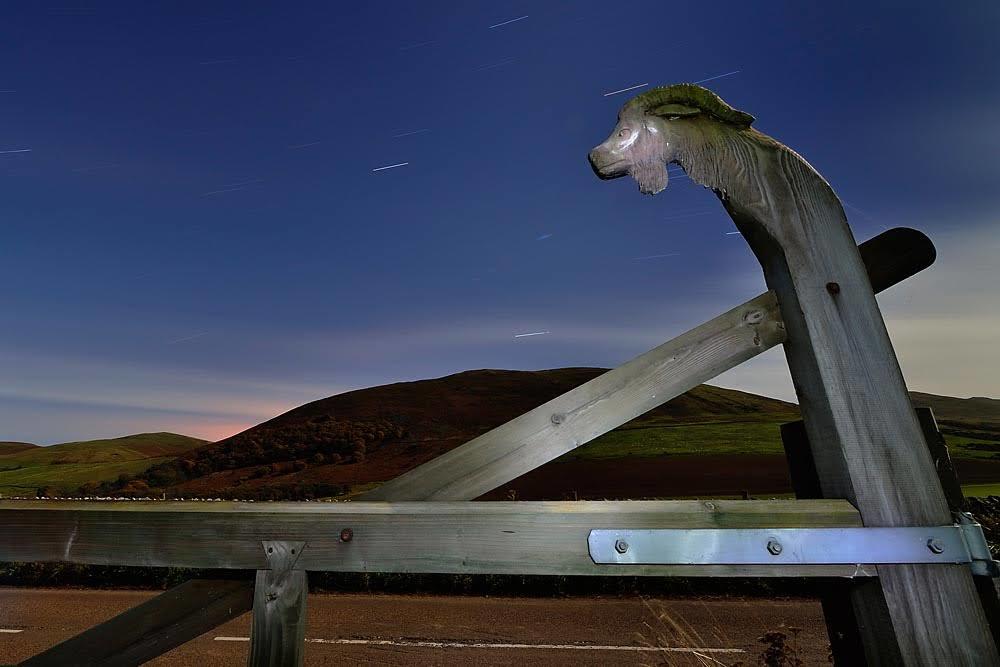 Although the site was referred to by The Venerable Bede, it was not until the mid 20th Century that it was rediscovered. Aerial photography in 1949, identified a series of interesting crop marks which were further investigated by Brian Hope-Taylor in the 50s and early 60s with excavations revealing a series of impressive timber halls and buildings.

If you want to learn more about Ad Gefrin, I recommend visiting the Gefrin Trust website.

Last week, I came across an English Heritage Recipe Card for Anglo Saxon Cakes. My initial thought was of King Alfred who famously burnt the cakes, but then I started wondering what you might have found in the kitchens at Ad Gefrin, and how Anglo Saxon food differed from ours.

Ad Gefrin would have been only one of King Edwin’s Palaces, as he would have travelled throughout his kingdom and stayed in various different royal sites. And we know that the royal household would have food supplied in these different areas through a form of tax in kind known as a “food render”. Along with cattle, cheeses, fish, and ales, it is likely these renders included local honey. Indeed, King Ine of Wessex expected 10 vats of honey in his renders. Did you know that ‘Bee Skep’ (a bee keeping basket used prior to the development of man-made hives) comes from the Anglo Saxon word ‘Skeppa’? Crops grown at the time, included Barley, Wheat and Oats.

Fun Fact: The first record of an apple being the ‘forbidden fruit’ mentioned in The Bible dates to the 7th Century, with the Latin word ‘malum’ translatable to either apple or evil. An interesting thought when we are learning about King Edwin who converted to Christianity. We also learn from Bede that Ad Gefrin could have been the spot where Bishop Paulinus baptised Christian converts in the River Glen in 627 AD.

With all this in mind, I decided that the oat, honey and apple cakes would be a perfect bake inspired by Ad Gefrin.

You can find the English Heritage recipe card here. 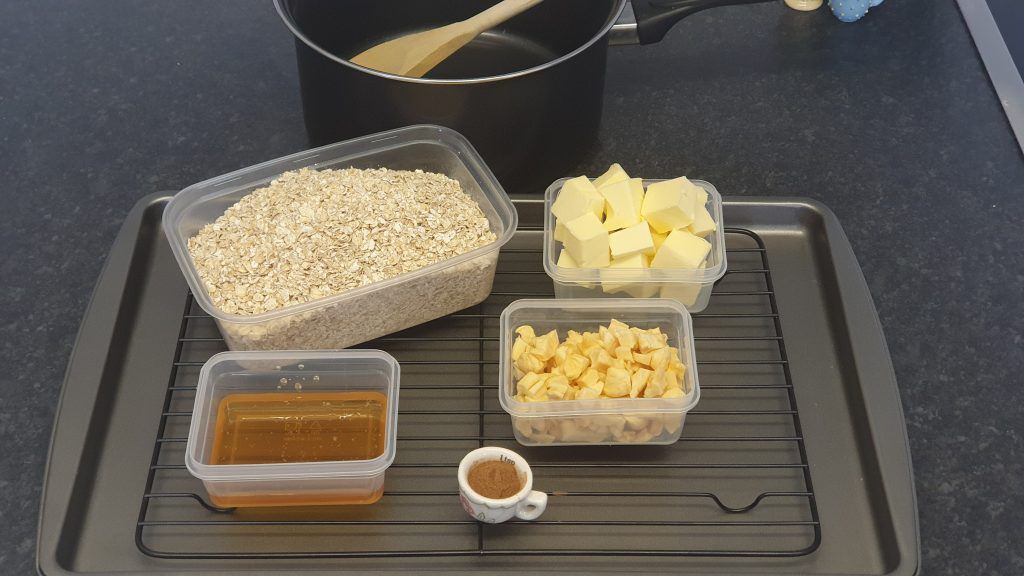 Melt the butter in a large saucepan and remove from the heat. 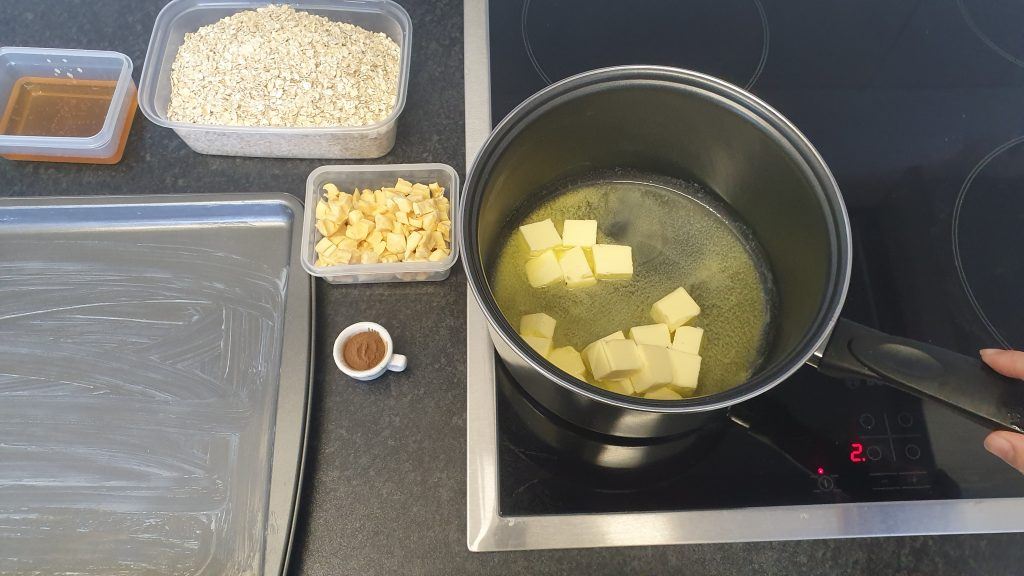 Mix the oats, cinnamon and dried fruit in a bowl and mix together. 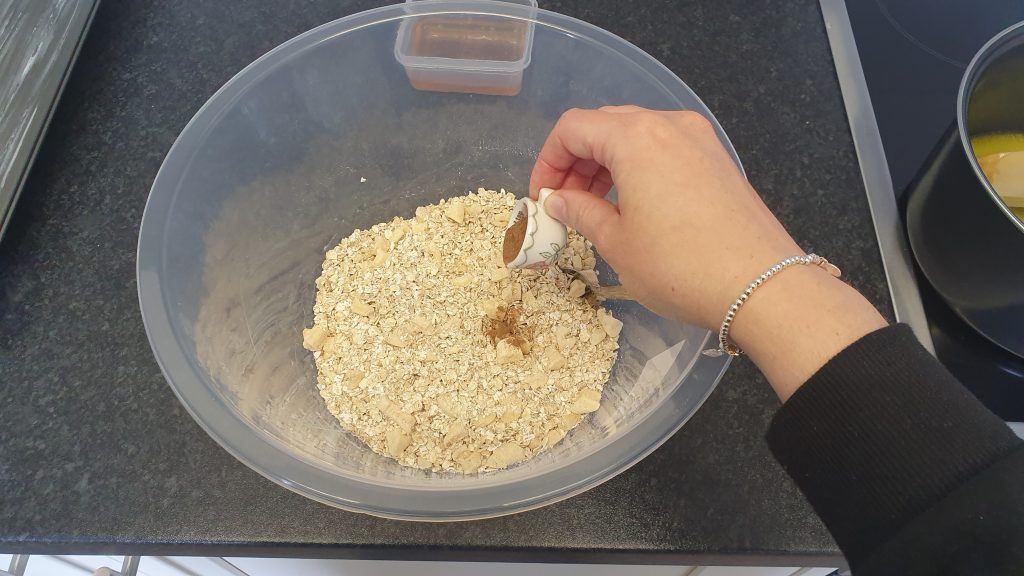 Pour dry ingredients into the butter, and then pour in the honey. 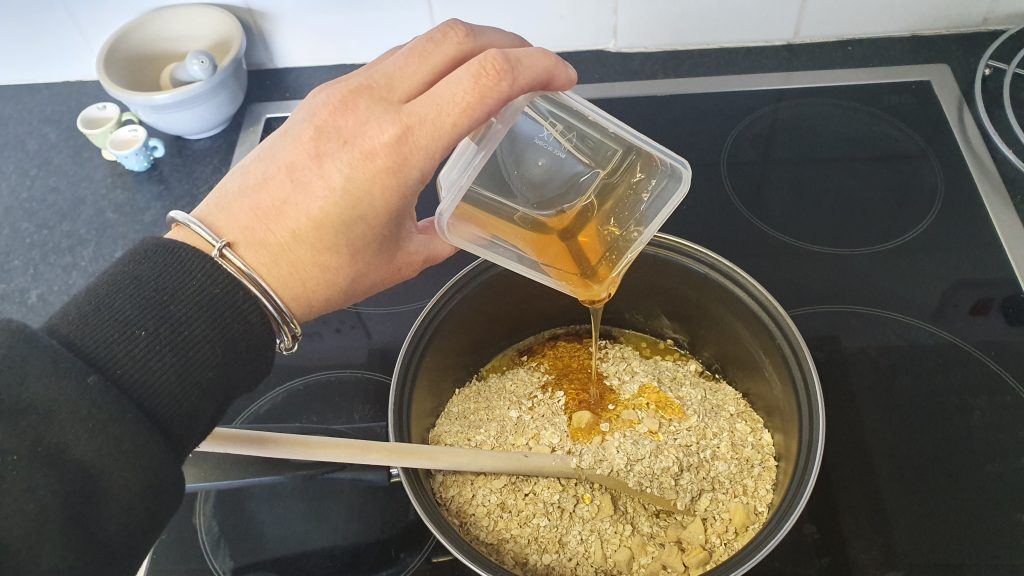 Stir until everything is well mixed. Note: I found the mixture quite loose but stick with it! 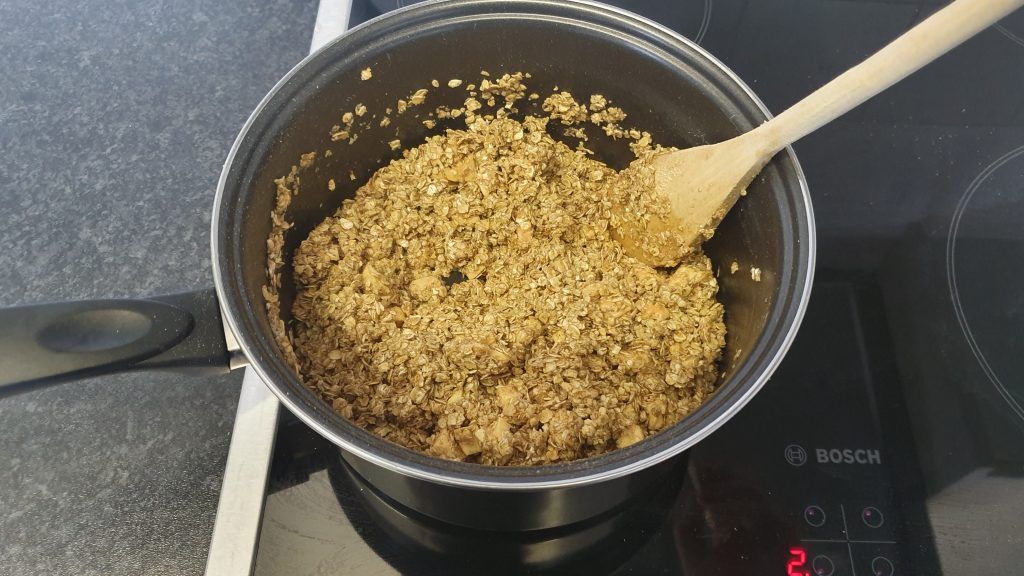 Grease a baking tray, Spoon 12 dollops of the mixture on it and then flatten them slightly. If the mixture falls apart a little, don’t be afraid to get messy and press them together! 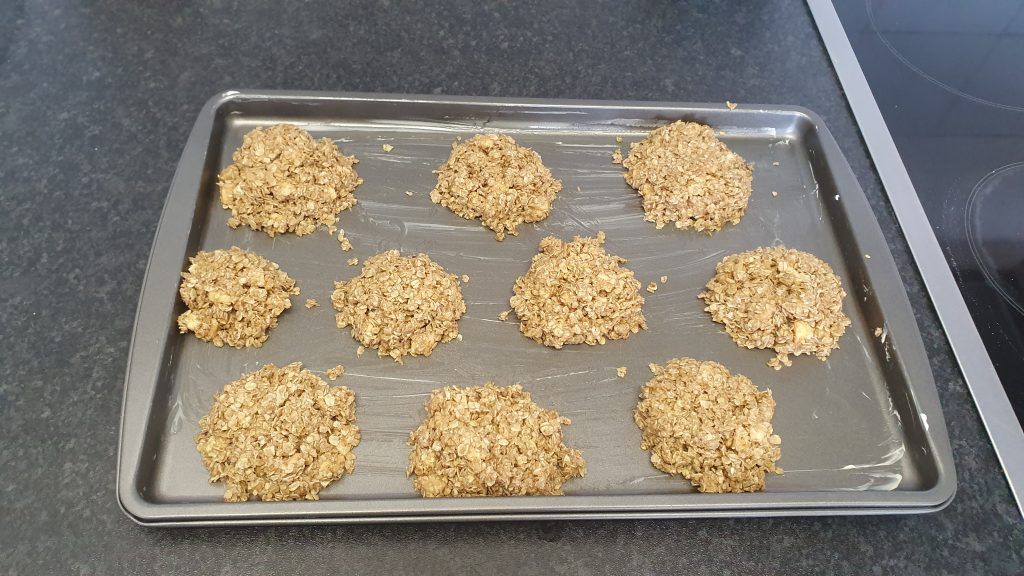 Bake in the oven for 10–12 minutes. I left mine for a further 5 minutes, when the edges had turned a golden colour. 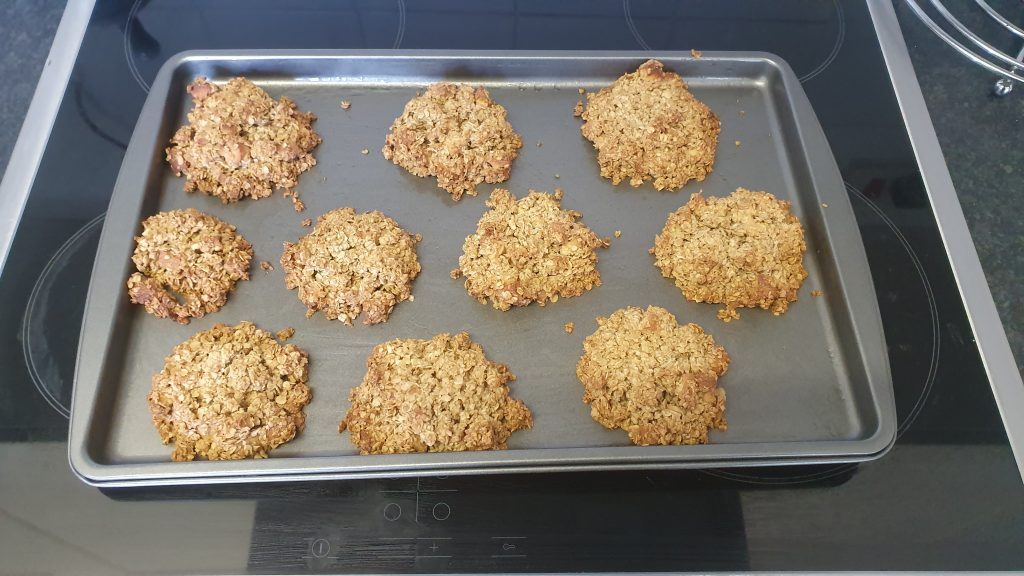 Place the cakes on a wire rack and leave to cool. They hold their shape better when they have cooled entirely. 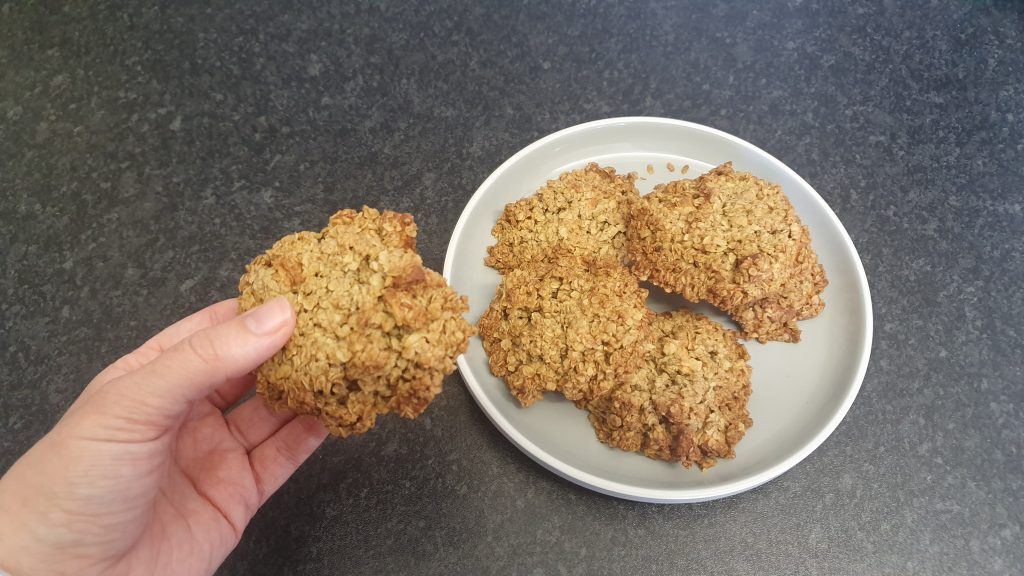 Delicious! I can also highly recommend them still warm and crumbled over stewed apples – don’t forget the ice cream!